Having had plenty of our runners perform well in the past couple of months but just hit the crossbar, it was brilliant to saddle six winners during May, with plenty of decent placed runs throughout the month too. 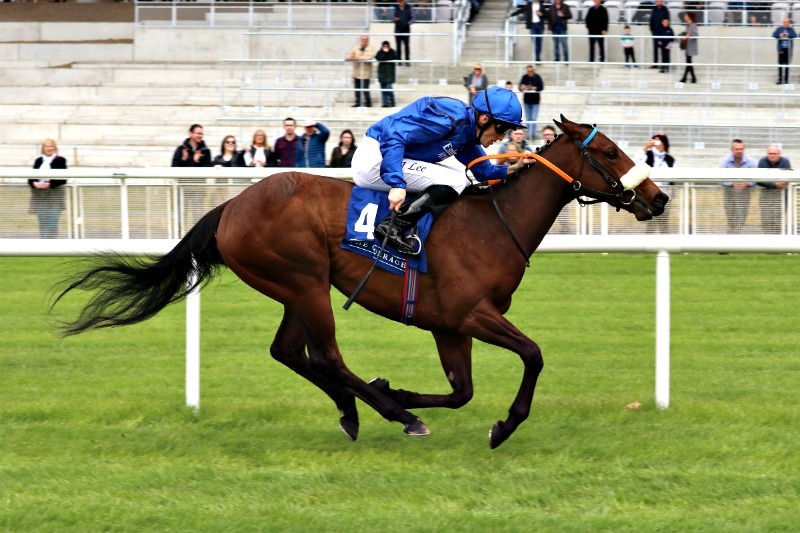 I was obviously thrilled to see Ickworth step forward from her debut at Dundalk to run out an impressive winner of the Listed First Flier Stakes at the Curragh early in the month. That looked a competitive race on paper but I was very pleased with how she settled and traveled for Billy Lee, before quickening up well from the front.

Hopefully she has a bright future for Godolphin and she should have no problem handling quicker ground. We're looking forward to saddling her in the Queen Mary Stakes over five furlongs at Royal Ascot.

We had a brilliant result in the Listed Polonia Stakes at Cork on the opening night of Mallow's straight seven furlong course, with Lethal Promise winning in good style and leading home Nitro Boost, who ran a cracker in third. You'd have to be thrilled with how the Irish National Stud Racing Club's filly traveled and picked up at the business end. We'll have a look at the Ballyogan Stakes next for her.

Nitro Boost did the Imperial Crown Syndicate proud and looks to be learning her trade nicely. She should have a good season ahead of her all being well and it's possible she could take in a five furlong premier handicap for three-year-olds at the Curragh next month.

It was brilliant to see Frank Fahy's Tipitena open her account at Roscommon in a maiden where some strong form was on offer. She showed a lovely burst of speed to make a winning run up the inside and is still learning her game so hopefully can improve again. Her next run could come in the Group 3 Munster Oaks at Cork.

I had hoped that Windham Belle would put up a big performance on debut last month at Naas but unfortunately the draw wasn't kind and we had to wait until the start of May at Dundalk to see what she's about, running out an impressive winner under Nathan Crosse.

The form of the race has worked out very well, with the second and third finishing 1-2 in a maiden on 2,000 Guineas day at the Curragh since. Our own Mogwli ran a cracker in that Curragh maiden - only beaten a head and short-head for second - and when we find a suitable opening for him hopefully he can do us proud.

Windham Belle, owned by Carmel Delaney, has since ran a cracker at Naas when only beaten three quarters of a length in third behind one of the antepost favourites for the Norkfolk Stakes. The Group 2 Airlie Stud Stakes is a possibility next month, but ultimately the Tattersalls Ireland Super Auction Sale Stakes on Irish Champions Weekend will be her end of season target.

It was unfortunate that Billy missed out on winning aboard Killourney at Gowran due to suspension but I was delighted to see the smashing looking three-year-old get the job done under Leigh Roche. A lack of pace in the race didn't suit last time but he did the job well from the front at the third attempt and capped off a good spell for breeder Pat Grogan and the Rachra Partnership, with Killourney's half-brother winning in America recently.

Our final runner of the month was a winning one, with Black Martini winning a five furlong handicap at Down Royal nicely, earning an 8lb rise from the handicapper. I was delighted to train our first winner of the year for Barouche Stud, especially with this small but well-bred filly who has a big heart. We'll try and sneak a bit of black type with her before the end of the year, she's a lovely breeding prospect in time, but a three-year-old fillies' handicap could be next.

We had hoped that Bongiorno would improve for her Cork return and I was delighted with her third in the Listed Vintage Tipple Stakes at Gowran, where she showed improvement from her run in the Noblesse Stakes. Joya Burns' four-year-old probably found the ground a little too quick in a two-mile Curragh handicap on Guineas weekend since but hopefully there is still more to come from her.

I was very pleased with how Up Helly Aa ran on his debut at Cork and he has a pretty significant pedigree for everyone here at Rathbride, being the first foal out of our star mare Fiesolana, who won the Group 1 Matron Stakes back in 2014. He's by Galileo and you'd have to be pleased with how he picked up between horses and finished off nicely after being switched to the inner. He only found a potentially smart Juddmonte colt too strong on that occasion and fingers crossed he can get off the mark before long for the Niarchos Family.

Arabeska has been a model of consistency this season and she was unfortunate to bump into a couple of smart types at Gowran when drawn wide. She posted another good second at Cork behind a well-touted Godolphin newcomer and if she continues running to that sort of level there's no reason why she can't win a maiden soon.

The ground at the Curragh was too quick for Downforce when finishing down the field in a premier handicap and we're looking forward to seeing him on softer ground later in the season. The Ayr Gold Cup is his long-term target. Peshkova finished off well down the stand's side in a big-field sprint on 1,000 Guineas day and we'll aim to pick up some black type with her in the Midsummer Sprint at Cork next.

John Connaughton's Yenillik finished behind Sir Dragonet on debut at Tipperary in April and took a step forward to finish midfield in a Leopardstown maiden behind another smart Ballydoyle colt, who could be St Leger-bound later in the season. Our Invincible Spirit colt is progressing nicely and I think he can develop into a smart stayer in time. He may well even be a cup horse for next season.

I was really pleased with how well Waterlemon Bay ran on her first start for almost 200 days at Gowran on her handicap debut against more experienced horses. Hopefully she can improve for the run next time in a handicap or four-year-old and upwards maiden.

I'm happy with how Memyselfandmoi stepped forward from her first start to put up two good thirds at Gowran for the Deerpark Stud Partnership this month. She can be a little too eager to get on with things and hopefully we can find a winning opportunity for her going left-handed in the not too distant future. Granularity bumped into a smart filly at Clonmel in April and wasn't beaten all that far at Dundalk since. There's a chance she may be better on turf and we'll aim to find a median auction maiden for her next, potentially on the other side of the Irish Sea.

Boughtinthedark looks to be going the right way. She improved from her first run of the season and was a shade unlucky in running at Leopardstown and Sligo. Michael O'Sullivan's filly can hopefully show her full ability when getting a little cut in the ground.

Elite Trooper Grey didn't get a clear run at Killarney on ground that is probably quicker than ideal. On the same card Royal Canford didn't get the rub of the green when third in the mile handicap but showed she has ability when things hopefully fall right for her. She unfortunately had a wide draw and troubled passage at Sligo - once her chance had gone Billy looked after her. Fingers crossed she can progress for Michael O'Donnell.

Amelia Jane showed some promise on her second start at Navan and hopefully can take another step forward from that next time. She seems to be growing and maturing and I think she'll be a lovely nursery type for the Spout Syndicate, who have been a good and patient bunch of owners. A slow start didn't help Designation in a five furlong maiden on the same meeting but she shaped well and can hopefully develop into a decent handicapper in time.

Annie Pender probably bumped into some smart fillies at Naas and I'm looking forward to letting her jump off and run from the front next time to see what trip is her best. Alice Milligan showed her inexperience on debut at Sligo and just ran too keenly for her own good. She can benefit from that run next time. We were happy that Newgirlintown loaded well on her first run for us at Fairyhouse and Nathan gave her a good ride. She can improve with more experience under her belt.

It was a very messy bumper at Down Royal that Ball Breaker made his debut in and he found the ground too firm. We'll be looking forward to getting him on some nicer ground. More Lies Ahead was second at Clonmel behind an impressive Gordon Elliot-trained winner who was previously second in a Grade 2. She's on a break now but hopefully she can run well in a mares' bumper or a one mile and six furlongs maiden when returning.

Faerie Laws ran better than her finishing position suggests at Gowran but has been very disappointing in general - she has loads of ability but unfortunately hasn't been showing it for a lovely group of owners.

Sweetest Taboo faced a tough task from 2lb out of the handicap in a big-field sprint at Naas but I thought she ran well considering. The handicapper dropped her another few pounds after finishing midfield at Navan and she can give the apprentices some good experience throughout the year. We haven't seen the best of Heavens Align but we've discovered a little problem with her, which hopefully we have sorted now.